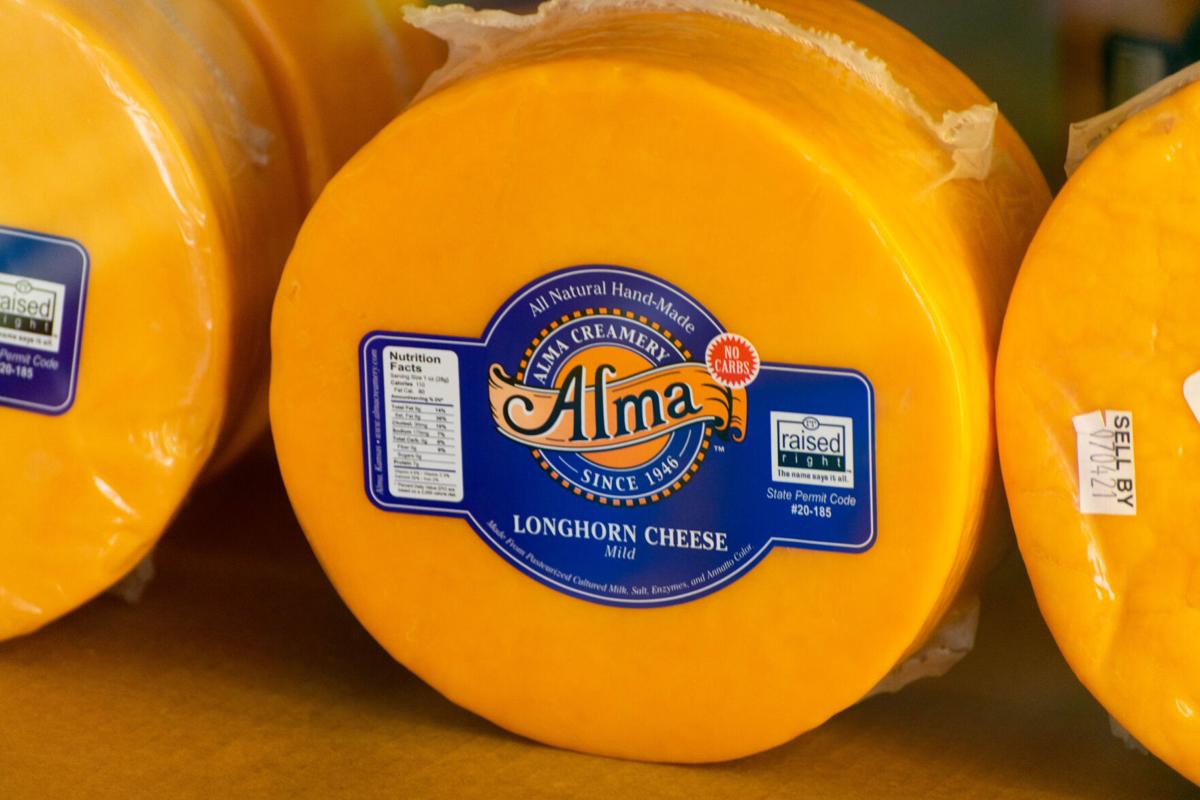 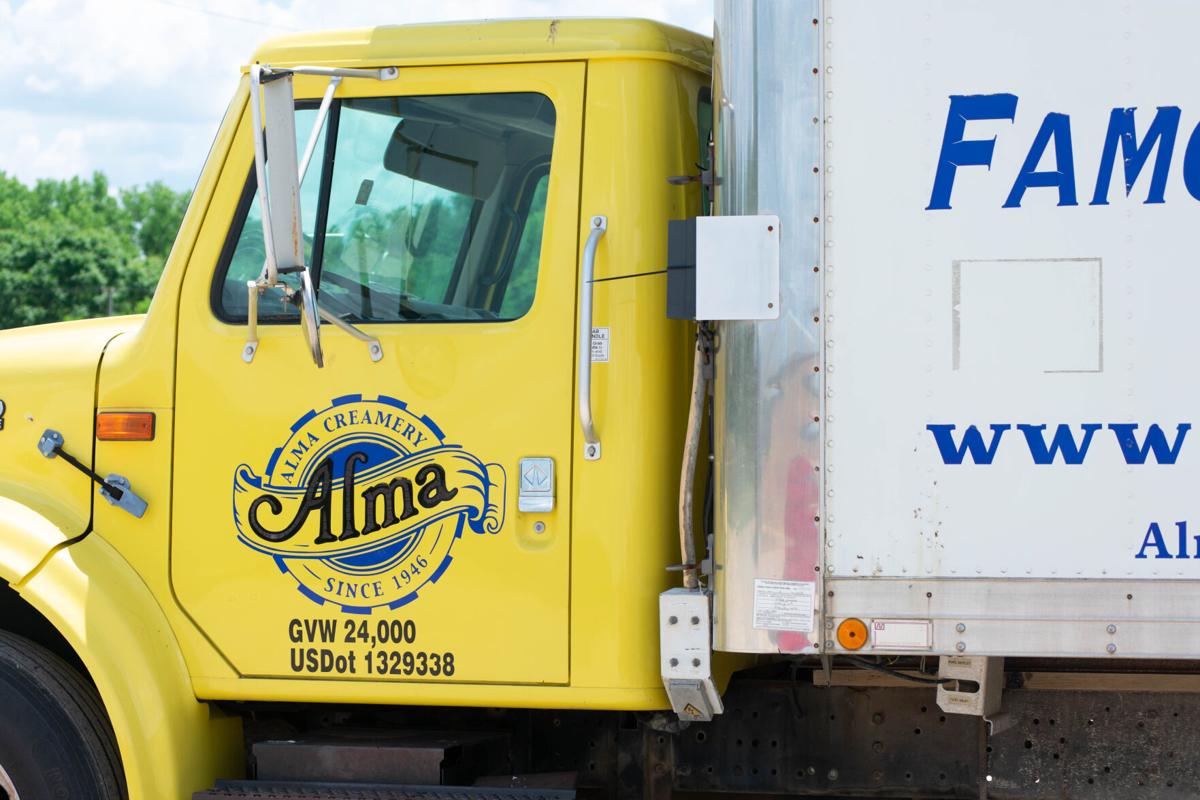 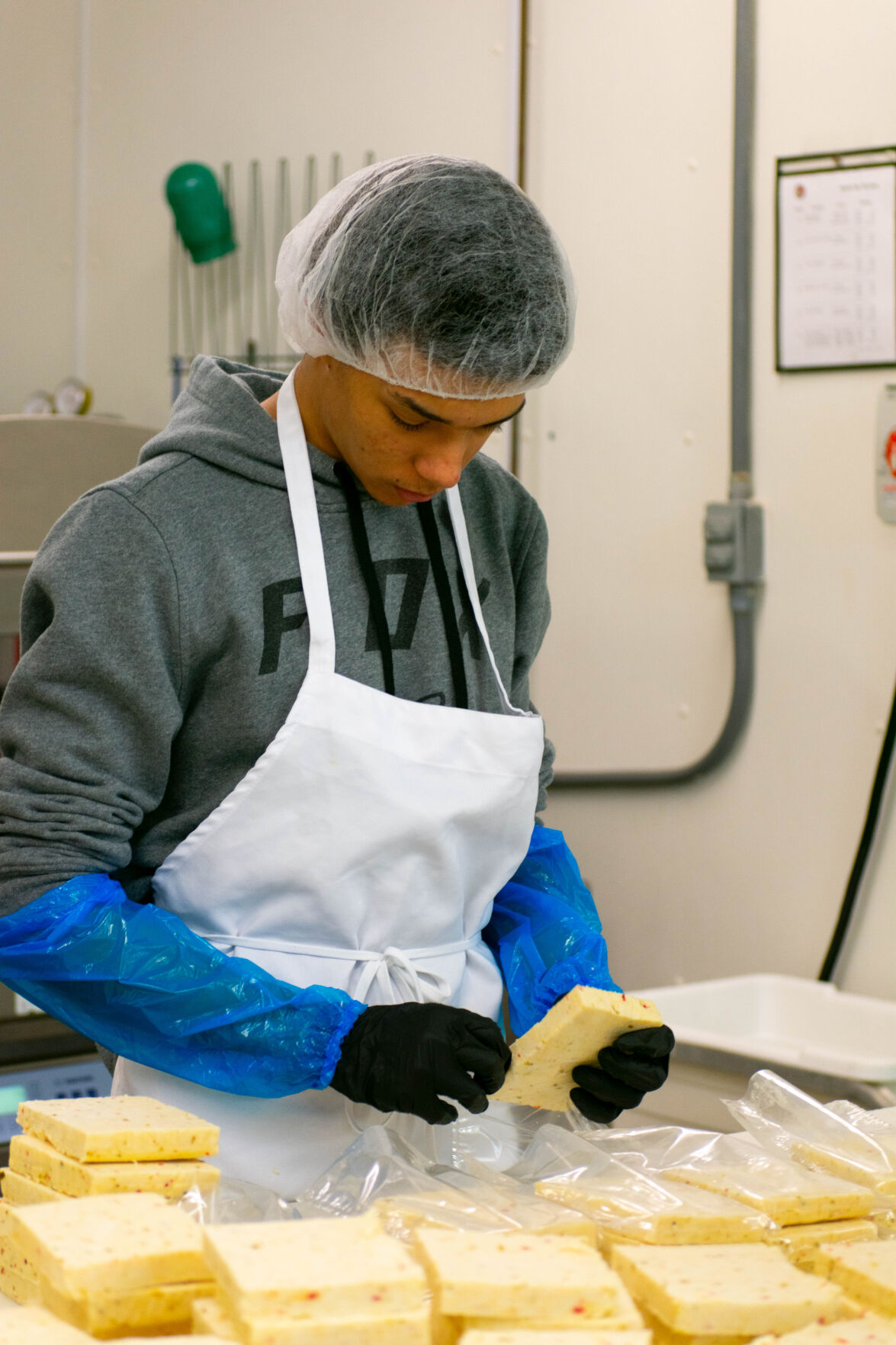 Just off Route 70, on the edge of a blink-and-you’ll-miss-it town, there’s an unexpected haven for the cheese lovers of Kansas. Alma Creamery has been providing the Midwest with its cheddar, jacks and all-natural curds since 1946.

“We’re primarily known for our curds,” said Cliff Cain, Alma Creamery’s general manager. “About 60% of the business is cheddar and 40% washed-curds like a co-jack or a colby.”

The creamery sources its milk from Ohlde’s Family Farms in Linn, Kansas, a partnership that helps ensure a high-quality product.

“We usually receive our milk on Sunday mornings,” Cain said. “I think they milk three times a day there, so when we get our milk, it’s probably been out of the cow for less than four hours. It’s very, very fresh.”

While finding good milk is the first step to making good cheese, the other pieces of the process are just as important.

“I like to say there’s an art and there’s a science to it,” Cain said. “The science is following all the rules. The art is doing it correctly.”

For all of Alma Creamery’s cheeses, the milk is pasteurized following Pasteurized Milk Ordinance (PMO) requirements before it’s moved to the vat where starter cultures and rennet are added. From there, the mixture is allowed to set up and is cut before being heated to the desired temperature.

“You start heating it from the 90 degrees to 100 degrees for cheddars and 101 degrees for jacks,” Cain said. “I can do that relatively quickly, in 8-10 minutes if I cranked it on high. The art is getting it up to that temperature in 28 or 29 minutes where it’s a linear, slow incline.”

Once the cheese reaches the correct temperature it remains for an additional 30 minutes before being transferred to the cheddar table for final processing. Keeping a watchful eye on temperatures throughout the process is key to having a perfect final product.

“The probability of creating a good cheese are much better because of that,” Cain said.

Once the cheese reaches final processing, the type of cheese being made determines next steps. Washed-curd cheeses are rinsed with cold water, drained and salted and are ready to be  pressed into blocks, long horns and stored. Cheddar goes through a cheddaring process, which brings cottage cheese sized curds together into 15 to 20 pound loafs. The staff then rolls these loafs, allowing the pH to drop and the loafs to flatten. These loafs are put through a cheddar mill, creating more appetizing, bite-sized pieces that are sold as curds or are pressed into blocks or longhorns and stored.

“At that point in time, everything else is done virtually the same,” Cain said. “It’s those three minute differences that can turn a cheddar into a jack.”

“You have to have good people who understand the process and are willing to follow the process,” Cain said. “It’s a difficult job because it’s not typical manufacturing. You’re not putting this cap on this bottle and then sending it down the line. It’s difficult because each job has multiple steps you have to learn.”

To keep new employees on track, Cain has set up a type of mentor shadowing program, using his self as a benchmark.

“There’s not a job in this plant I haven’t done at least a hundred times,” Cain said. “I’m very familiar with it and I have my times and techniques down. So, I tell new people, do it my way until you can meet or beat my times while still following our current Good Manufacturing Processes (cGMP) . Then I don’t care how you do or if you have a different technique that’s quicker. As long as your following safe operations and cGMP protocols.”

“Last October we participated in the USDA Farmers to Families food box program,” Cain said. “We were cutting 10,000 pounds of cheese a week. It was right at the start of our holiday season. We do probably 50-60% of our business from October to December. So not only were we doing our normal sales and holiday sales, we were also doing the USDA program. It was very, very busy.”

Despite significantly ramping up production, the creamery employees didn’t miss a beat.

“For that, you had to hit the deadline,” Cain said. “We went from 8 or 9 people to 20 people almost overnight. To get them on board, I created a type of manufacturing environment. We did have an assembly line and we were able to do it and our regular job. We didn’t miss one deadline.”

Because the plant already had strong biosecurity protocols in place, additional measures to prevent a COVID outbreak were easy to implement.

“Right when everything started, I held a team meeting and said ‘guys, if I could capture you here inside the processing plant 24/7, nobody would get sick.’ All the protocols they talk about, we were already doing.”

The creamery required anyone who may be sick to stay home, and paid wages to anyone who called out of work for safety reasons.

“I think from a corporate standpoint we stood by our employees,” Cain said. “And they stood by us. Even though we were short-staffed and it was long hours, they put in the time to do an effective job for the company, themselves, and most importantly, the customers.”

In addition to the store front attached to the plant, Alma Creamery cheeses can be found across Kansas.

“We sell to US Foods and Dillon’s,” Cain said. “Because of how small we are, those are a testament to how good our product is.”

Alma Creamery also works with smaller distributors to get their cheeses in restaurants, and targets local markets by attending farmers markets and getting a branded van out on the street. The dedicated push for more marketing has helped grow the brand beyond Alma.

“Growing our business out into western Kansas has been a big achievement,” Cain said. “We’re starting to grow into Kansas City, which were excited about. We’re opening new markets.”

Despite its growth over the years, Alma Creamery maintains the small, family-owned feel that keeps its customers coming back for more.

“There’s some nostalgia to it,” Cain said. “We’re one of the few creameries in Kansas. As recent as the mid-80s we were getting milk from 17 different local dairies. Some of those smaller dairies have either gotten bigger or gone out of business, so nostalgia is a big part of it.”

For the creamery, each piece of the puzzle, whether it’s the milk being used or the markets the cheese is sold in, has been essential to seeing continued success.

“Every little piece goes into a good cheese,” Cain said. “And from my standpoint, we do it some of the best around because people still keep coming back and buying our cheese.”