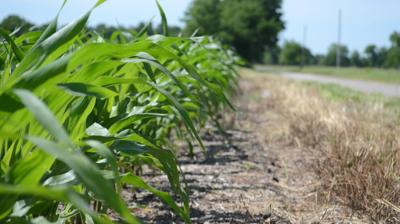 Farming has always been an intriguing enigma for Bob Ralph. Facing an unplanned, un-funded early retirement, he looked to expand beyond his fairly low-maintenance cattle operation into full-time crop production, but when traditional outputs required too many inputs, he looked to growing a specialty crop instead and Princeton Popcorn Company was born.

“I didn’t really just want to get a normal job. I have an entrepreneurial spirit, and when you’re your own boss, it’s just it would seem pretty tough to get into something where you have a boss,” Ralph said. “So I realized I had to continue down that path. And then I just kept thinking about farming.”

From the Ground Up

Initially, with a fast-paced job in the Kansas City area, Ralph purchased 40 acres of ground and some cattle to have as an outlet for his agricultural dreams as well as stress management.

“I bought cows, because I’ve always wanted to be a farmer. And cows seemed like the easiest entry because they’re not daily maintainers,” Ralph said.

“They kind of fend for themselves. So that’s what got me into purchasing my first piece of property.”

Walks amongst the cows on that initial piece of property proved to be soothing and jumpstarted Ralph’s ideas for a future career in agriculture. With dreams of row cropping on the brain, Ralph started researching local properties and identified potential locations for expansion.

But, he still had research left to do.

“I went down to the coop and said, ‘Hey, guys, I want to buy like 80 acres down the road from me, it’s tillable and here’s the price. Can you just help me with like the finances like understanding how much I need to farm and how much I’d make doing it?’ And they were like, Oh, sure, absolutely,” Ralph said.

“They sat down and used basic terminology to explain what an input was; the different cycles and processes and farming a row crops such as corn. And the long and short of it, is it was going to at that time cost me like $404 an acre to farm corn. With the approximate yield of that farm, they estimated to get $397 in income. So I realized very quickly, that it seemed impossible to make any money farming.”

Ralph identified a need for a creative solution and looked for alternative, value-added crops, hoping to keep his dream of farming alive. And, with a little research, he found popcorn.

“I didn’t really actually know where popcorn came from. So I had to go home and study. And lo and behold, it’s just a seed. As it turns out, it’s just like regular corn, but it’s a different variety,” Ralph said. “So I went to the grocery store HyVee and bought a pound of popcorn off the shelf, and then went out to my farm and planted it by hand, by the way, kernel by kernel, because I didn’t know any different.”

While the initial results left a little to be desired, the first planting surpassed expectations.

“I had very low expectations, I didn’t figure it would probably grow, because, you know, farmers get things to grow. And I’m not a farmer,” Ralph said. “But much to my surprise, and excitement, it did actually grow that year.”

Once Ralph had obtained land, about 213 acres total, and a product with profit potential. He began perfecting and scaling the operation. He tested until he found the perfect variety and did larger test plots each year until his first full-scale year growing product in 2019 for sale in 2020.

“It had to be different, so I chose the mushroom shaped variety, that pops like a mushroom shape and doesn’t taste like one,” Ralph said. “I also decided that I had to have ultra premium quality.”

Ralph expects his popcorn to pop perfectly with no “Old Maids” each time, as well as to turn out with all the kernels a consistent color and shape.

“It just had to really be a home run when the customers bought it,” Ralph said. “Luckily, I’ve been able to achieve that not without a few stumbles along the way.”

Growing popcorn is different than growing dent corn in a variety of ways. Breeding for popcorn prioritizes traits like uniformity and flavor over traditional traits for field corn, like early planting and yield. The result is a much smaller plant, about 75% of the size and yield of a traditional corn plant, with more circular kernels that have to be processed with sunflower seed plates in the planter.

“In field corn, having a real early planting is beneficial to some people, while in popcorn you’re really going for uniformity because humans will eat the popcorn. Whereas field corn typically is processed before a human eats it,” Ralph said. “ We’re appealing to a palette and appealing to eyeballs. So the traits that we care about as popcorn growers are completely different. And we need a visually appealing kernel. And we need it to perform when it pops. So those are the traits the breeders have gone for. And in those, they just haven’t pursued the early planting.”

Ralph said he typically plants in early May, while he has planted as early as late April and as late as early June. Popcorn varieties are much more heat tolerant than field corn varieties and slightly less tolerant to excess water, so planting date can be critical.

With an emphasis on flavor from planting to packaging, Ralph said the best way to prepare his specific variety of popcorn is on the stovetop.

“The best way to pop my popcorn variety is in a pan with hot oil. And then the second best would be hot air. I don’t recommend doing it in the microwave,” Ralph said. “I work really hard to make great popcorn and I don’t really want my popcorn to [just] be a flavor delivery device.”

Avoiding becoming all about added flavors, as well as the success Ralph has seen selling his product direct to consumers on Amazon and now in Kansas City area grocery stores, is what deterred him from expanding his operation into popped and packaged popcorn.

“My original plan was to pop, flavor and package,” Ralph said. “And that way, there is more profitability in there. And I’d be able to do the farming aspect, but then also make it through financially.”

At the basic roots of Princeton Popcorn Company, the driving force has always been Ralph’s — or Farmer Bob as he is known throughout their branding—passion for production agriculture.

As a businessman and entrepreneur, Ralph said a career in agriculture had everything necessary to make a perfect lifelong career.

“It has everything that would keep me interested,” Ralph said. “There’s the fascination part. How it actually works, it’s just fascinating to me; seems like magic. There’s the risk component. You know, is this crop going to work, do we get too much rain, are we going to get the rains we need? There’s the reward part. There’s just literally nothing more satisfying than being in the combine, harvesting a crop that you planted.”

Not immune or unaware of the risks involved with producing a crop, Ralph said he’s continually engaged in his operation.

“It can be wickedly unfair sometimes, but people keep farming. So that tells me that they must love it,” Ralph said. “And certainly, I understand that, but here’s the other part that I think might be different than a traditional farmer. I’m a first-generation farmer, literally, everything is new and exciting to me.”

While he makes up for a lack of experience with enthusiasm, Ralph said he sees just how valuable a family history in farming can be for anyone wanting to be involved in agriculture.

The end result, is a product to be proud of.

“I’m very prideful, when it comes to my products, because it’s like, I grew that. It’s one farmer, one field,” Ralph said. “I have a relationship with my customers. I’ve planted the seed, raised it up and harvested it. Then cleaned it and conditioned it and finally put got it in a package and got it to you. So you know, who produced your food. And that’s pretty intimate. And the supply chain is very, very short. If you show me a kernel that you bought from me, I can show you the field it was grown in. That’s pretty amazing.”