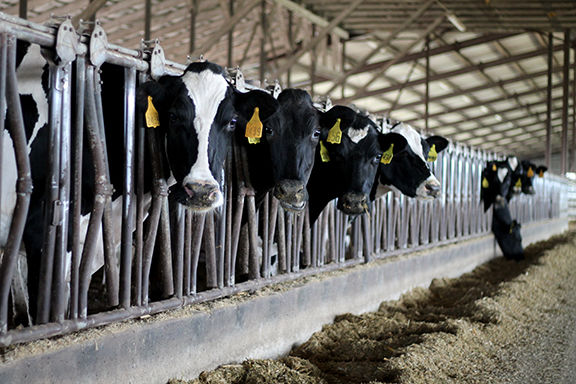 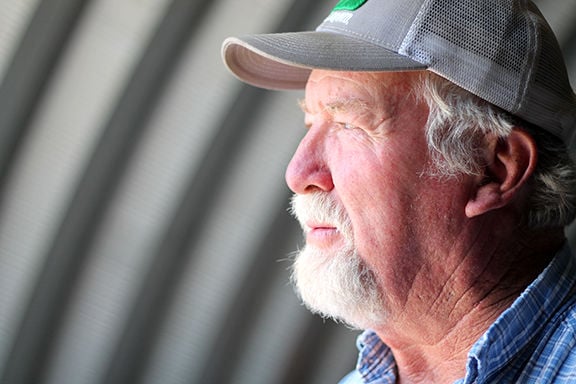 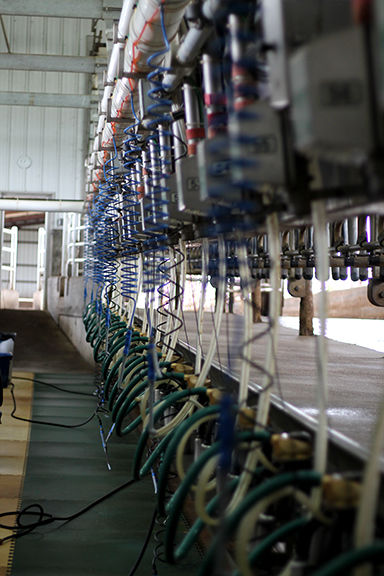 Forward is the only direction and fast is the only speed for Mazie, Oklahoma, dairyman Charles Coblentz.

Milking 500 head daily, along with managing more than 5,000 acres of row crops, beef cattle and a fertilizer business could be an exceptionally challenging task for a corporation, but for Charles and sons Charlie, Adam and Anthony, it’s just life.

“What we’ve built here is the result of working seven days a week for 40 years with no paid vacation or sick leave,” Charles said. “It’s something you really have to love.”

The Coblentz Dairy is the eye of the storm. Each son jumps from ATV to mixer wagon, from fertilizer delivery to dairy barn cleaning, from toddler hugging to customer serving, and Charles is at the helm.

“Between being a councilman for Dairy Farmers of America, the dairy and the fertilizer business, my phone rings about a hundred times a day,” Charles said. “But that’s nothing compared to my oldest son Charlie, he’ll field at least double the calls I do.”

“I remember pulling a sack behind me picking cotton with my mother when I was as young as five,” Charles said. “My mother made sure I earned the same price as every other laborer in the field, and we pulled our own weight.”

Today, Charles owns the same farm he and his mother picked cotton on, an unintentional tribute to her resilience and determination to see her son treated fairly.

Similarly, Charles’ fertilizer business began after he realized the local fertilizer dealership was charging he and his neighbors an inflated rate compared to the larger farms in the area.

“If there’s one thing about my business that people remember, I want it to be that I was fair,” Charles said. “I believe in treating everyone the way I would like to be treated, and I try to act on that principle in my business.”

Respect is a business model Charles has followed for many years and is one that continues to serve he and his family well.

“I think my dad is driven by the need to make things right,” Anthony said. “Call it spite or whatever you like, but my dad won’t allow himself or the people around him to be taken advantage of, and that has helped him build a good business.”

Charles’ attention to detail and quality is evident in every aspect of Coblentz dairy, from the “so clean you could eat on them” milking parlor floors to the fresh white fences. His antibiotic watch list includes only five of the 500 cows he milks, and often none, a fact that alludes to overall herd health and milk quality.

“We want to produce the best milk as efficiently as possible here,” Charles said. “Watching the herd for illness and tracking treated cows is a big part of that.”

The new milking barn at the Coblentz Dairy, built in 2010, was designed specifically to increase the herd’s efficiency. The double-30 rapid release barn more than doubled the amount of cows milked at a time and drastically cut down on milking time.

“The barn was a big investment, but previously we were spending almost a full day milking, with very little downtime between the morning and night shifts,” Charles said. “The new design and equipment has really been a lifesaver for us.”

The move to expand and update was a choice influenced, like many choices on the dairy, by Charles’ childhood days working with his uncles.

Uncle Tom worked harder than any man he had ever seen, Charles said. But, Uncle Tom’s equipment was constantly failing and he occasionally mismanaged his operation. Uncle Sam didn’t work as hard, but it was mostly because he didn’t have to, Charles said. His shiny new equipment and up-to-date farm alleviated the stress of the operation.

“From the time I was young I’ve always said I want to work like Uncle Tom, but manage like Uncle Sam,” Charles said. “The combination is just right to build a business.”

Charles’ sons, who returned to the farm with new ideas of their own, often bring in the new practices and equipment at Coblentz Dairy. Drive-over gates and rotating back-brushes in the barn are small evidences of the new life breathed into the farm by the sons, each with their own operations to manage outside the dairy.

Where Charles was influenced by the management practices of his parents and uncles, Charles’ sons have been influenced by his experience on the dairy, and that family connection is at the heart of it all.

“I’ve been married to my wife, Ellen, for 42 years now,” Charles said. “We’ve tried every single year to take a trip away from the dairy for a week or two, despite how difficult that is.

Time with your family is never wasted, and I encourage everyone, in a family business or not, to take full advantage of time spent together.” £