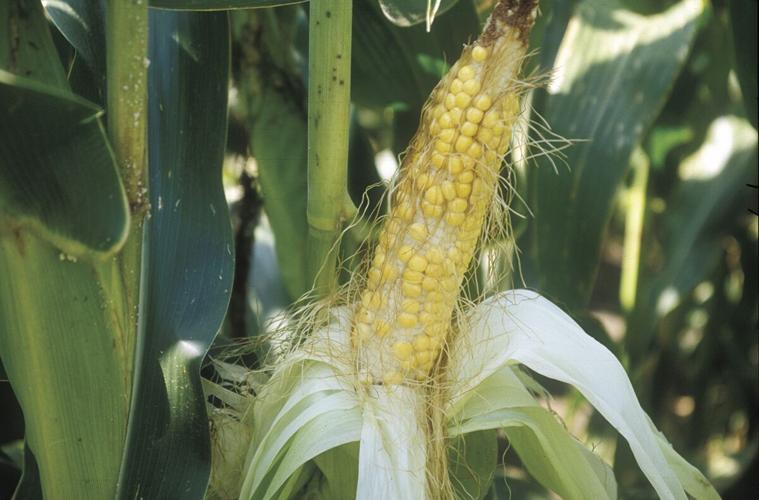 Reduced number of kernels formed on this corn ear, likely due to disruption of the pollen tube growth. 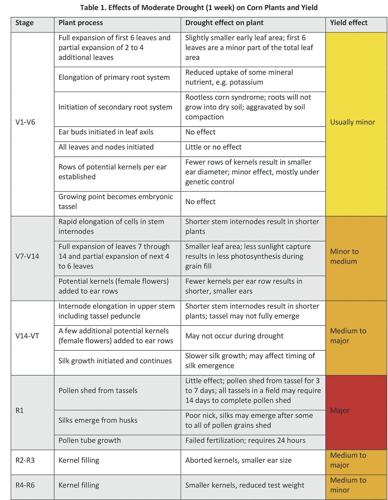 One and one quarter inch. That’s how much rain corn plants need each week in July and August to maintain rapid growth and produce the best possible yields.

Mother Nature has not been kind to Missouri’s corn crop this year, says University of Missouri Extension agronomist Bill Wiebold. One indication is the rapid expansion of trouble areas in the U.S. Drought Monitor, he says.

As of July 12, about 60% of Missouri’s land area is abnormally dry or in one of the categories of drought, according to the Drought Monitor. Most of the affected area is in southern and central Missouri, but the near-term weather forecast throughout the state is not encouraging, says Wiebold.

Some parts of Missouri recently received rain. Water use by corn plants can reach 0.25 to 0.33 inch per day when air temperature is near 100 degrees, so the small rainfalls that were common may not have been very beneficial.

A reason for concern is that much of Missouri’s corn crop is in its most vulnerable stage of development, R1. Table 1 summarizes the effects from moderate drought on corn plants and the resulting impact on yield. Some effects are reversible with adequate precipitation. Unfortunately, most effects, especially those that occur at R1, will not improve even with plentiful rain, says Wiebold.

Because of this year’s wet spring, farmers postponed corn planting. This delayed development in some fields. Some of these fields experienced drought conditions during part or all of what should be rapid stem elongation. Stem elongation occurs from V6 through VT.

Water pressure is the driving force for expanding stem cells. With reduced water availability, individual cells will not elongate to their maximum size and plants will be shorter than normal. If a few nodes are affected, the change in height may not be noticeable, or it will occur in small areas of the plant. But if most internodes are affected, plants may be quite short – perhaps half normal height.

Leaves will also be smaller than normal. This effect on plant height and leaf area is not reversible. Once plant cells mature, cell walls harden and additional expansion is not possible. The effect on yield from shorter plants and smaller leaves is difficult to predict. It depends on the degree of the effect and if stress is relieved during silking and early grain fill, says Wiebold. With adequate rain, yield reduction from shorter plants may not be major.

Drought during elongation of the final five internodes through R2 (blister) is most harmful to corn yield. As the tassel prepares to emerge, silks elongate and extend outside the husks. Timing of tassel and silk appearance is crucial to corn yield. Yield depends on silks being fully visible when pollen sheds.

Unfortunately, drought slows silk elongation but has little effect on tassel emergence. If stress is great enough, most of the pollen sheds before silks. The result is poor kernel formation, especially on the tip of the ear. This reduction in kernel number is not reversible.

Assuming silks are able to intercept pollen, the next 24 hours are critical to yield. It takes this long for the pollen tube to grow from the captured pollen grain to the area on the ear that will become the fertilized kernel. Silks must remain fully turgid during pollen tube growth. Even an infinitesimal drop in water content can interrupt tube growth. If pollen tube growth stops, no kernel will form. This may be the most vulnerable aspect of corn yield to drought stress and the reason even a short period of stress at this time can cause considerable damage to yield. In severe weather, only a few kernels will form. This reduction in kernel number is not reversible.

If kernel fertilization is successful, kernel number can still be reduced. Kernel growth requires a constant supply of water and nutrients from the mother plant. Drought can decrease the growth of young kernels to the point that their development stops. These aborted kernels remain small even if their neighbors continue to grow.

When drought prevents kernel fertilization or stops kernel growth, results cannot be reversed. A tiny ear remains a tiny ear. Silk and pollen tubes are highly vulnerable to lack of water. With extreme weather, yield reduction can be more than 60%. Missouri farmers are facing weather challenges not seen for a decade.