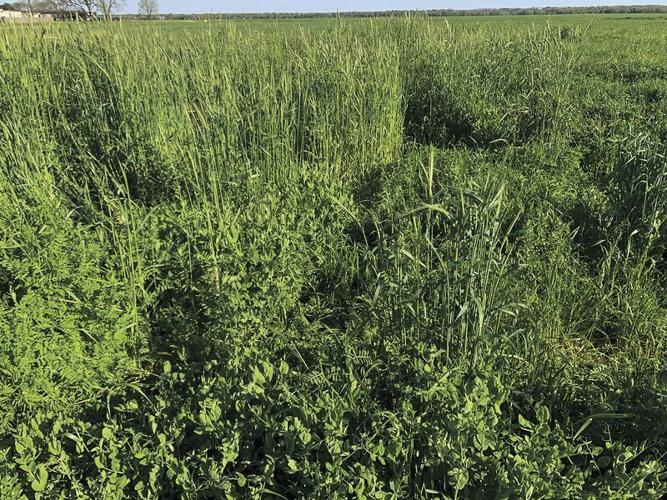 Winter legumes grow with cereal rye as part of a cover crop study at the Vegetable Research Station in Kibler.

Seeding rates of winter legumes at 1.5 times the full rate were statistically similar in biomass production except for crimson clover.

The other winter legumes tested were common vetch and Berseem cover.

The study by the research arm of the University of Arkansas System Division of Agriculture took place from mid-October 2021 to mid-April 2022 at the Vegetable Research Station near Kibler.

The study also found that each legume type has similar weed suppression regardless of the seeding rate. However, some of the legumes were better at suppressing weeds.

When planted with a winter legume, cereal rye suppressed weeds 50 percent better than a cover crop without cereal rye.

Total biomass was also 50 percent higher when legumes were paired with cereal rye than when planting a legume alone.

“This significantly higher cover crop biomass would result in more organic matter to be incorporated into the soil or used as organic mulch,” McWhirt said.

Legumes on their own

The legume that did the best job of suppressing weeds on its own was hairy vetch. Austrian winter pea came in second at weed suppression. McWhirt said there is less concern for some growers of Austrian winter pea becoming an “escaped weed” if not terminated before going to seed, so growers often prefer it over vetches.

The study’s results offer recommendations for specialty crop growers to use lower seeding rates to save on seed costs while still retaining the benefit of biomass production and nitrogen production.

For a legume-only cover crop with the goal of more nitrogen production, McWhirt recommends hairy vetch at 5 pounds per acre or Austrian winter pea at 20 pounds per acre.

If biomass and additional weed suppression is the goal of the cover crop, McWhirt said growers can add cereal rye to the planting at the rate of 30 pounds per acre used in the study.

The recommendations are to plant cover crops with a drill seeder. Higher rates may be required if using broadcast planting due to lower germination rates.

Research by the experiment station has also found positive results when a mix of cereal rye and Austrian winter pea is used for a cover crop before watermelons. A 2021 paper on this research can be found online at https://bit.ly/CoverCropsforWatermelons. The paper also mentions benefits of certain cover crops for pumpkins.

To learn more about cover crops, check out the Division of Agriculture’s fact sheet at https://bit.ly/Understanding-Cover-Crops or find the Cover Crops Training for Arkansas Producers link at https://bit.ly/CoverCropsTraining. Horticulture Ph.D. student Amanda Lay-Walters helped to analyze the results of the winter legume-cereal rye study with McWhirt.

To learn more about Division of Agriculture research, visit the Arkansas Agricultural Experiment Station website: https://aaes.uada.edu. Follow on Twitter at @ArkAgResearch. To learn more about the Division of Agriculture, visit https://uada.edu/. Follow us on Twitter at @AgInArk. To learn about extension programs in Arkansas, contact your local Cooperative Extension Service agent or visit www.uaex.uada.edu.