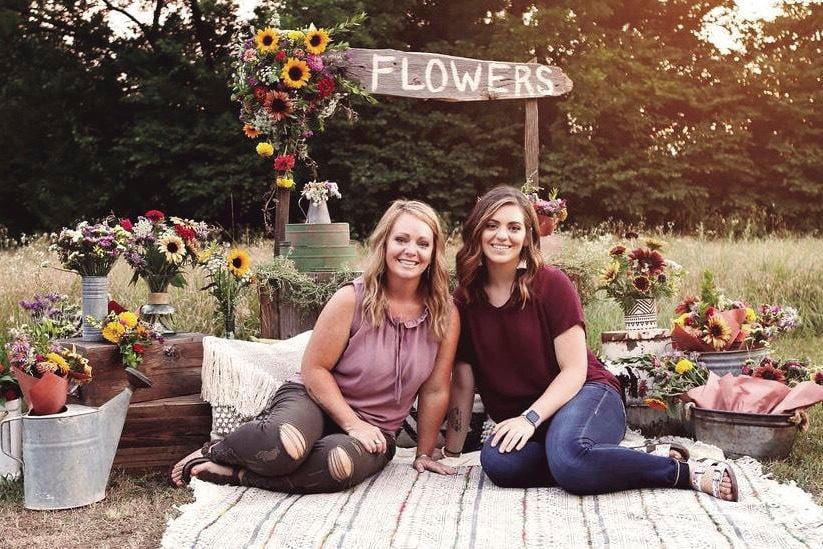 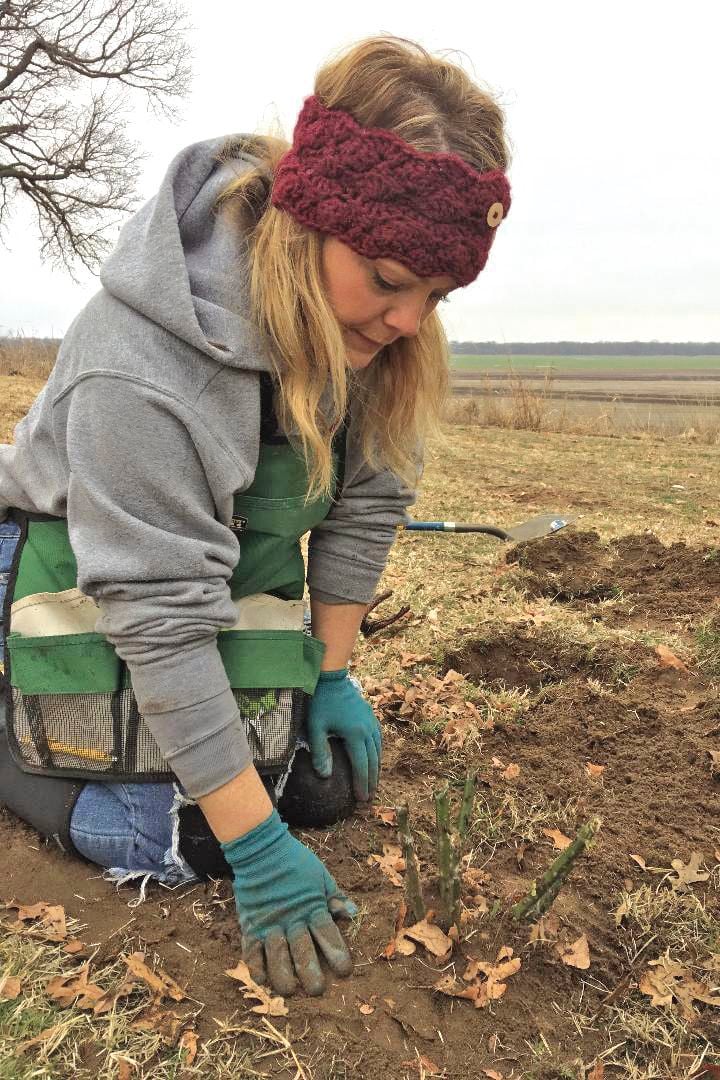 Gretchen Evatt was intrigued by an article on flower farming and decided to start River Bend Acres. 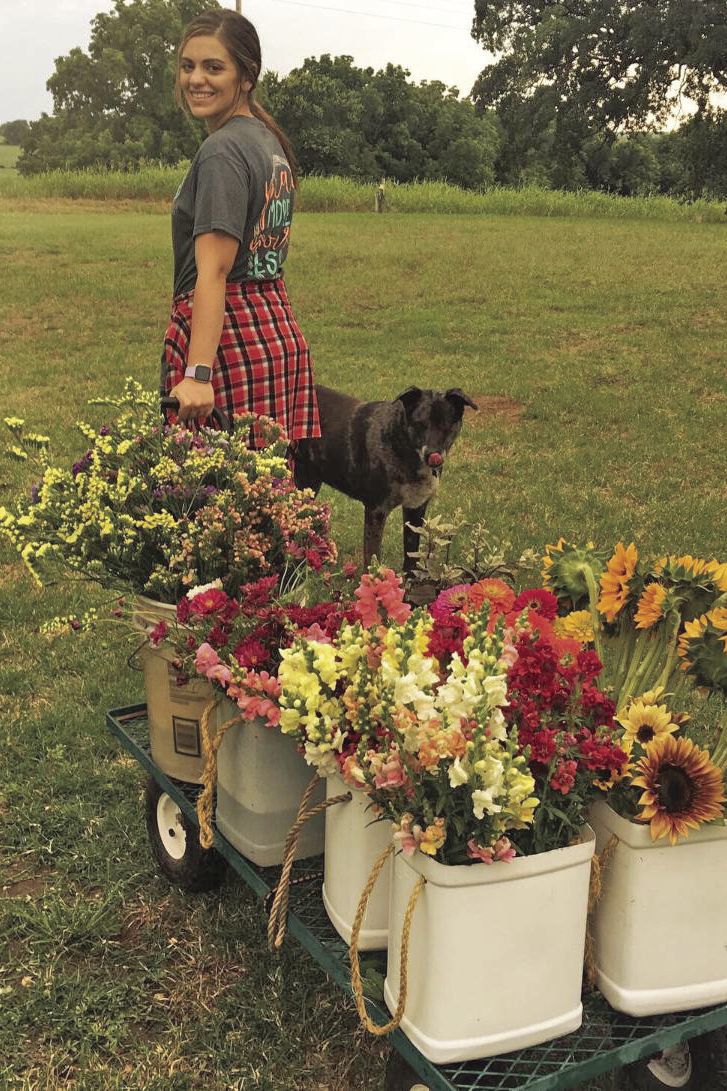 Gretchen Evatt was intrigued by an article on flower farming and decided to start River Bend Acres.

Gretchen Evatt was working as a designer for a florist in Pawnee, Oklahoma, when several factors came together to convince her to start growing and selling her own flowers.

For starters, her employer was ready to sell the shop.

“I had seriously considered buying it, but I just didn’t feel at peace with doing that,” Evatt recalled. “But I felt like flowers were my passion, and I wanted to keep going with it.”

Then she came across an article on flower farming in America, which intrigued her. The cut flowers she worked with everyday were almost always imported from overseas.

“I started to do more research on it and decided that was something I definitely wanted to try,” she said.

Around the same time, her father-in-law passed away, and she and her husband Ward had the chance to move to the family’s traditional wheat, corn and soybean farm near Ralston, Oklahoma.

With those pieces falling into place, Evatt decided to create a new home-based business, River Bend Acres, to grow, market and deliver her own floral arrangements. Instead of opening and maintaining a brick-and-mortar retail location, she chose to rely on social media for marketing and arranging deliveries.

Her 22-year-old daughter Lily, who also lives at the farm, handles that aspect of the business.

With their first growing season behind them, the two have been pleased with the response so far. Evatt credits their success to the quality and freshness of the flowers as well as affordable pricing.

“Some people now say they won’t buy flowers from anyone else,” she said. “We’re excited about the future and the possibility of growing more of what we sell year-round.”

They currently have an 8- by 14-foot greenhouse for starting new seedlings in February and one hoop house, with plans to add another by next winter.

River Bend Acres delivers to Ponca City, Pawnee, Fairfax and the surrounding area. They charge a flat $5 delivery fee on each account.

“That makes it equal for everyone, and it seems to be working pretty well,” she said.

Operating without a brick-and-mortar store has been an asset, reducing overhead and allowing them to be more efficient with their labor.

“Social media is the future, but it’s also the now,” she said. “If you don’t use it, you don’t have a business. We wouldn’t be where we are without it.”

Without store hours to maintain, they have more time to spend tending and harvesting flowers, which is very labor intensive.

Many people envision a flower farm as a place where fields of wildflowers grow freely with little human intervention aside from picking them.

But that’s not the reality. Growing 50 different varieties of flowers on 1 acre of land this past year involved a tremendous amount of work.

“It’s about knowing how to care for each of those varieties. It’s about knowing what time of the day to cut and how to keep them in condition before they go to the customer,” she said. “Flowers feed during the day, so you always want to cut them early in the morning or late in the day and get them directly into the cooler after that.”

The business takes its name from the farm’s setting along a bend in the Arkansas River. Their sandy-loam soil drains well and has proven ideal for growing flowers, even with last year’s flood-prone conditions, she said.

But even when soil and weather aren’t perfect, Evatt wants to empower others to try growing their own flowers.

Last fall, she put on a floral design workshop at Red Bird Farm in Enid, which is run by her husband’s brother and sister-in-law, Kent and Becky Evatt (the story of their Christmas tree and u-pick blackberry farm was also recently featured in Farm Talk).

“One of our objectives is to do more teaching on how to grow flowers and how to make your own bouquets,” Evatt said.

Being creative and tackling any project that comes along has been vital to their business. In addition to standard weddings, funerals, dinner parties and church gatherings, they’ve also set up stands at three seasonal farmers markets and offered a weekly subscription service that they hope to expand next year.

They also partnered with a well-known area portrait photographer to provide bouquets, floral backdrops and props. Evatt and her daughter have worked together remodeling houses so they are handy at building and customizing things, another advantage they can offer to clients.

“It’s been a lot of different neat experiences we hadn’t necessarily planned on,” she said.

When Evatt first started out, she wasn’t sure what she would do when winter arrived. But she knew she wanted to keep the business going year-round while continuing to source as locally as possible.

Bear Creek Farms of Stillwater is helping her achieve both of those objectives.

Owner Vicki Stamback runs one of the only flower farms in the country that also serves as a wholesale floral distribution business.

“I started out 23 years ago growing everything I was selling,” Stamback said recently. Soon she had added two large greenhouses to extend the growing season. Then she diversified again by bringing in product from California and Miami, as well as other grower friends she knew around the country.

“Oklahoma is very, very challenging for growing flowers,” she said.

Even so, over the past few years Stamback has witnessed a revival of interest blossoming across the state.

“I used to be the only flower farm in Oklahoma and now there’s probably 25 of us,” she said.

Time will tell how sustainable the trend proves to be, she noted. Growing flowers sounds romantic, but it requires a lot of hand labor, usually in hot, dirty and dusty conditions. Finding dependable labor to work on flower farms is a huge challenge that has only gotten worse with the rise of the medical marijuana industry.

While there’s lots of talk these days about buying local, whether in regard to food or flowers, she also observed that the big drivers in the Oklahoma market are still price and convenience.

Families preparing for a funeral often want a place where they can walk in together, sit down and look over the options, she noted. Someone who wants to grab a bouquet for a friend might prefer the convenience of picking it up at a store rather than contacting someone who works from home.

“It’s going to be interesting to see where that goes,” she mused.

However the trends pan out, Stamback has proven that a passion for growing flowers can translate into a long-term viable business. “If you really love it then it’s going to work, because you’ll do whatever you need to do to make it work,” she said.

Evatt is approaching River Bend Acres with similar determination and optimism about her future prospects.

“It’s so rewarding when you can make somebody a bouquet that you know you’ve grown yourself,” she said.

Keeping a family farm going requires creativity, openness to new ideas and recognition that the farms of the future might look different than those of the past two decades, she added.

“When there’s a farm in your family, it’s a great heritage to pass down, and that’s kind of being lost because so many small farmers can’t sustain an income from it,” she said. “But it’s something to be valued and treasured. It is well worth the time and effort to find a way to keep that heritage alive.”