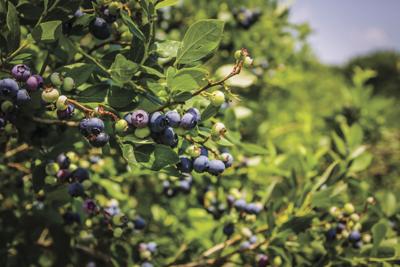 Picture Lucille Ball’s infamous chocolate assembly line debacle. Exchange the industrial scenery for a shady pecan grove, the bonbons for quarter-sized blueberries and the result is an accurate picture of most of Outback Farm’s youngest clients.

Mike Auxlor’s Pryor, Oklahoma u-pick operation is a veritable paradise for berry enthusiasts of all ages and appetites.

“I always joke with people who ask if it’s okay to eat as they pick,” Auxlor said. “It’s perfectly natural, in fact you should eat — I just pretend I’ll have to weigh them along with what they pick on their way out.”

While children and adults do their damage with gallon buckets rather than assembly lines, the berries are always more than they can pick or eat — to the tune of close to 4,000 gallons of blueberries picked by site visitors each year, with an additional 3,000 pounds frozen and sold in the off-season.

The harvest is a lot for the small, family operation staffed by Auxlor, alongside his wife, son and daughter-in-law. It’s also nearly unheard of in the state of Oklahoma.

“When we first started, we went to OSU and they told me under no circumstances to plant blueberries in Oklahoma because they all fail,” Auxlor said. “So, I started doing my research.”

After initially owning a small apple and pear orchard in Canada, Auxlor was well acquainted with the basics of fruit production and eager to apply his knowledge in a wholly different growing region.

“I had always been interested in growing blueberries,” Auxlor said. “When I talked to other growers from Missouri and Arkansas they all said they were starting from propagation cuttings rather than clean plants and I thought, oh there’s the problem.”

Where most local growers would plant 2,000 to 3,000 and lose more than half before the end of the first year, most of the plants raised as clean plants from an Oregon-based blueberry nursery Auxlor found in his research lived to maturity.

“The person from OSU came back to visit us a couple of years later and asked how we did it,” Auxlor said. “Now, we distribute clean plants from the same grower we use. There may be up to 40 pallets of fresh blueberry plants here in the spring for growers in several states.”

The Auxlor family continues the attention to detail dedicated to selecting their initial blueberry plants to every aspect of maintenance and growth.

“Everything we do is organic. We don’t spray any harsh herbicides or pesticides,” Auxlor said. “We do use a natural, vinegar-based herbicide to kill weeds around the blueberry plants themselves.”

Blueberry season typically lasts from late May through the end of July, but maintenance for the farm and blueberry plants is a year-round job for the Auxlor family.

“Normally it takes us three months to prune all of the bushes by hand,” Auxlor said. “This year with the machine on the tractor, it only took us four days and saved a lot of strain on our bodies.”

Even with heavy pruning, the now ten-year-old blueberry bushes come back thicker and stronger than ever. The result is tall, full bushes with an abundance of berries.

“The rows are seven feet apart, and even then the blueberries grow so this it can be difficult to walk between them,” Auxlor said. “Of course, we feed them a lot of nutrients based on soil tests and leaf analysis to encourage that growth.”

The quality and quantity of berries at Outback Farm caught the attention of a major organic grocery retailer, in addition the Auxlor’s own dedicated regulars, but he wasn’t interested in trading the atmosphere of his farm and home for potential corporate success.

“We’ve had a couple of opportunities to sell all of the blueberries to one company,” Auxlor said. “We really weren’t interested because we’ve built up some fun relationships in the last 10 years. Watching little kids come out with their parents and then all of a sudden they’re in high school and bringing their girlfriend out here on a date. It’s kind of cool to see.”

In addition to the relationships built, he said the difference between his berries and the store bought variety, mainly came down to handling. Local friends and employees pick all of the pre-picked berries available at Outback Farm and they do it with care.

“Blueberries you buy frozen in the store are picked, cleaned, washed, packaged and transported several times before they are frozen. It might takes weeks and by then the whole character of the blueberry has changed,” Auxlor said. “Ours are picked and frozen the same day.”

In addition to selling plants and fresh berries, Outback Farm stocks a variety of blueberry jams and jellies, blueberry maple syrup and local honey from their on-site bee hives.

Auxlor’s farm is also the last operation in the state of Oklahoma that makes blueberry wine from the juice of their own berries.

“People ask me what my favorite variety is, but it’s hard to say because they’re all good at different times,” Auxlor said. “You just have to let them develop in their own time.”