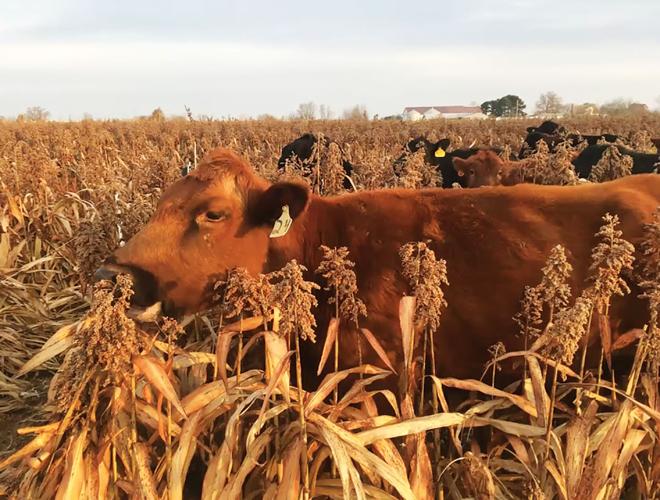 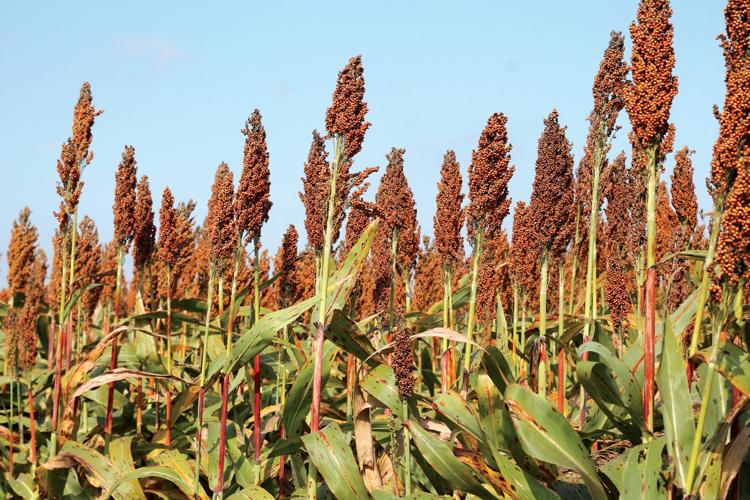 Cattle neck-deep in milo in one of University of Missouri Extension agronomist Rusty Lee’s fields is not cause for concern. They’re meant to be there and will remain all winter, because on Lee’s Montgomery County farm winter grain sorghum supplies around 400 grazing cow days per acre.

“The system I’m advocating for works best if you leave the grain in the field, leave the combine in the shed and take your cattle out to the grain,” Lee said.

Lee explained 53% of the causation for the gap between profit and loss for cattle producers is wrapped up in feed costs. Eliminating the need for hay production, equipment and feeding greatly improves producers’ probability of profitability.

“In this system, even with a cow lactating in the winter, I can put weight on her,” Lee said. “I can increase her body condition. That’s hard to do in the wintertime. It’s darn sure expensive. But it’s difficult to not add weight with this system. You have to be careful that you don’t overfeed them.”

Feeding grain head-intact milo to cow-calf pairs over the winter is not a new theory, in fact it’s not even one Lee himself created. A neighbor began experimenting with the practice more than 20 years ago and the idea caught on throughout Lee’s North Central Missouri region.

The theory behind Lee’s grazing strategy is just as simple as it sounds — take the cows to field and let them eat. Although, it has a few caveats.

The first, is to allow cattle a very small portion of the field each day. Calculate grain yield average, along with the Total Digestible Nutrients of the milo in order to get an idea of how much field space to allocate per day per cow to meet requirements. Allow to large of an area and the system loses its efficiency.

“You have to remember this is a once a day allocation,” Lee said. “You cannot give cattle two or three days worth of milo, the way you would have bale hay perhaps. But you can’t do that in this model they just waste it. So you have to commit to being with your cattle every day for 20 minutes.”

A single strand of electrified polywire provides the boundaries for allocation. Cattle broke to electric fence are a critically important piece for success. The wire is moved once each day to allow cattle access to a fresh patch of milo. With high-yielding fields, the initial patches are very small and may initially be uncomfortable for the cattle, but in this system, small amounts of grain and forage each day are an important component.

“We have crawled around on hands and knees and we’ve measured grain and weighed grain and counted berries, and we come up with about 80% of the milo goes into the cow’s mouth,” Lee said. “About 20% gets wasted, the stalks and the leaves, primarily. When we allocate correctly, it appears that it takes about 30 minutes for all the grain heads to disappear. And it takes about two hours for the remaining crop foliage and stalks to disappear. The cattle consume all but the bottom 18 inches of stalk.”

Protein in the milo crop as a whole is around 7%, while TDN runs between 76% and 77%. There’s a lot of digestible energy to be had in a field of milo, and Lee said leaving the grainheads intact before grazing is a key component of the overall system.

“The top four inches is the grain heads only and tested around 8% protein, 77% TDN. A lot of energy there,” Lee said. “If we just pull the leaves off, and we test that, the protein is staying up in the 8% range, but the energy fell off. When we combine milo and we have stubble left and we turn cattle in there’s some forage there to graze those stalks, but you’re not going to get the carrying capacity because the grain is now gone.”

With current prices, MU budgets allow cow-calf producers about $1.62 worth of hay every day over the winter. Milo is significantly cheaper to grow, especially as about 40% of the total cost to grow milo as a grain crop is typically attributed to mechanical harvesting, transportation and storage — costs that are eliminated in this system. The cost disparity between the two is stark, even considering supplementation.

“It’s cheaper to supplement protein than energy,” Lee said. “You could use soybean meal, some good quality hay, you can stockpile grass and graze to pick up the protein while we’re getting the energy out of the milo. You’ve got a lot of options there and they are all cheaper than a hay system and supplementing energy.”

Lee said he typically aims for a production of 120 bushels per acre of milo, which accounting for some cattle wastage, gives about 5,000 pounds of grain per acre. With 10 pounds of grain needed per head per day, he can achieve around 500 cow grazing days per acre, closer to 400 days in a harsh winter.

He selects his sorghum variety according to yield data and the longevity of the standing crop.

“When I choose a sorghum hybrid variety to grow, I’m looking for lodging resistance,” Lee said. “The longer I get this crop to stand in the field is a big deal. And I’m looking at the plots in our area and see how things are yielding.”

Row spacing is critical during planting to ensure the right balance of grain head to forage crop, as well as maximum yield.

“The closer you get the rows, the more you’re apt to grow a forage crop rather than your grain crop,” Lee said. “So if you want to no-till drill forage you can do seven and a half inch row spacing or plug up some holes and aim for 15 inches, but if you’re trying to grow grain, 30 inch rows are my preferred way to do it.”

Conventionally planted milo also helps with ease of post movement, although it can result in muddy pastures during a wet winter. Using step-in posts and single electric wire placed near the middle of the posts can help manage cattle and allow calves to escape the chaos and potential injury during a fresh move.

“These cattle are going in here with calves on their side and the mistake some people make is trying to put the wire low enough to keep the calves in,” Lee said. “Put the wire up so the calves go under it. They’ll come back to their moms. You put it down low and the calves tear the wire down. We keep the wires on so they can go under and in a pasture we would call that creep grazing.”

Troubleshooting: What about acidosis?

“In the 20-something years that this has been going on in Montgomery County, we’ve had not one problem, not one health issue with cattle related to eating, overeating, or too much grain, right? It just doesn’t happen,” Lee said.

In talking with MU livestock nutrition specialists, digestibility of milo compared to corn may help explain the lack of digestive upsets.

“It may be that the slower digestibility of milo is what lets the system work,” Lee said. “Some producers want to say, you’ve got to condition milo so that it can be digestible. It’s not as easily digested as corn. We’re just grazing this straight out. So it’s not about does it need to be processed? It’s about do the cattle get their nutritional requirements met from the milo? Yes, they do.”

Lee said cattle may continue to act hungry on milo, even once their nutritional needs have been met. Supplementing protein with grass or hay can help cattle feel full.

“You can feed cattle until their nutritional requirements are met. But you haven’t fed them where they feel full and or content,” Lee said. “You will find that the cattle may back graze on some grass or if you got some old junk hay, you can feed a little something just to keep them happy.”

Is prussic acid a concern?

“The only time that you cannot graze milo is when frosts,” Lee said. “It’s only a few days for the prussic acid to volatilize and leave the plant but we always get just enough frosh to make it dangerous and not completely kill the plant. And then a few days go by and its safe to graze again. I just figured there’s two weeks that I can’t graze milo. By November 1 Milo’s ready to go.”

Does it work for other species?

“Not only does it work well for cattle, it works exceptionally well with small ruminants,” Lee said. “Interestingly enough with sheep, you don’t have to do daily allocations.” Sheep can’t see over the milo and instead eat the crop down systematically from one end to the next to maintain visibility.

How about interseeding cover crops?

“We’re supplementing protein. So everybody wants to try to intercede some clover or soybeans or something in there to give us protein and I’m one of them,” Lee said. “We have tried. We have aerial seeded into milo with airplanes and drones. Milo shades out everything you can grow.

For more information Lee can be contacted at leerw@missouri.edu.