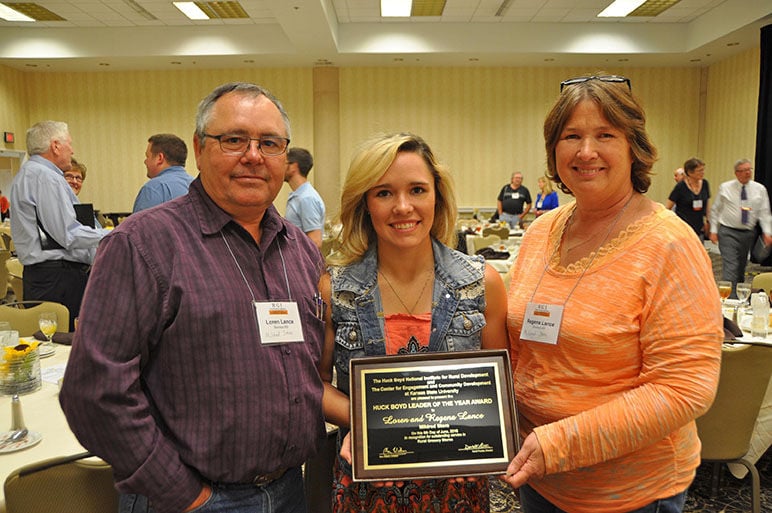 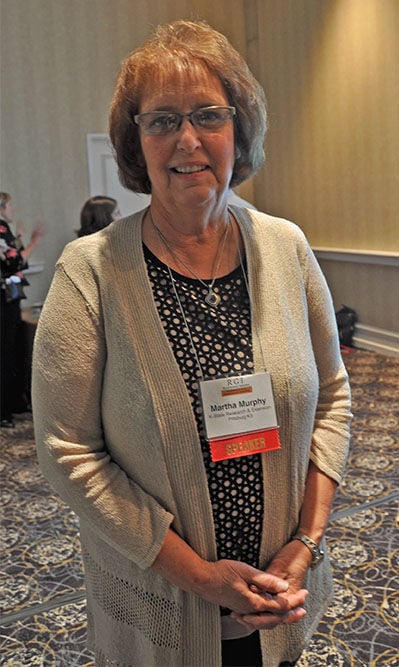 Small town grocery stores anchor many rural communities, but they also struggle with high operating costs, purchasing minimums imposed by food distributors and competition from chain stores, according to surveys conducted by the Rural Grocery Initiative at Kansas State University.

At the recent Rural Grocery Summit, the fifth national conference of its kind presented by K-State and collaborating organizations such as Kansas Rural Center and Center for Rural Affairs, the hand wringing was evident. As discount “dollar stores” invade ever-smaller communities, they add to existing pressures imposed by big box retailers like Walmart, many say.

“Talk to just about any store owner here, and they will mention the dollar stores,” said David Procter, director of engagement and community development at K-State and the Rural Grocery Initiative’s founder.

Jenny Osner who with her husband Clint owns and operates Hired Man’s Grocery and Grill in Conway Springs, was quick to oblige. She said fresh meat, including freshly ground burger meat and traditional “rope sausage,” are the big sellers. But customers often stop in to buy those items only after filling their cars with groceries purchased at a big box store further away.

Meanwhile, the local zoning board is all that stands between her town and a dollar store that wants to open across the road. Many people don’t realize that the newer dollar stores offer food items, even produce, which puts them in direct competition with small town grocers, she said.

There’s a perception that chain stores are cheaper, but that’s often unfounded, she said. Not only that, but shoppers have the illusion that when a chain store opens in a rural area it will offer the same pricing and selection as the same stores in bigger towns even though that’s usually not the case.

After three and a half years, their business is doing well, but Osner and her husband have other careers to fall back on if they need them. In fact, many store owners attending the conference appeared to rely on alternative revenue streams to help fund their food retailing adventures. Among them were the two honorees named as rural grocery leaders of the year by K-State’s Huck Boyd Institute for Rural Development, both full-time farmers.

“Who can take a town of 28 and quadruple it in one night? We can,” joked Regena Lance as she and her husband Loren and daughter Lydia accepted their award for re-opening and revitalizing a store, formerly operated by a couple with the memorable names Charlie and Lucy Brown, in tiny Mildred, Kansas.

She was referring specifically to “music night,” held every third Saturday, when they rope off Main Street and her musician husband and other entertainers provide free tunes.

Lance, who works full-time as dean of instruction at Fort Scott Community College, also described them as “working to keep the Kansas in Kansas” by stocking local products like Alma Cheese and Emporia’s Fanestil Meats in quaint, old-timey surroundings straight out of Mayberry.

The Lance family manages to cash flow their store and deli without borrowed money, they said, but it is a continual challenge due to high energy requirements, equipment maintenance and labor costs.

Shane Tiffany, a prominent member of the Kansas Livestock Association who runs a feedlot near Herington, was honored as well for his role in preserving Alta Vista’s market. After his family moved to Alta Vista, his wife’s hometown, he was elected mayor just as the town’s only grocery was closing. They ended up purchasing and renovating the store and hiring an experienced local to run it.

While many store owners have diversified business interests, Nick Graham, a conference keynoter, proved it was possible to buck the trend. Graham was featured on CBS News 10 years ago after purchasing his hometown grocery store in Truman, Minnesota, while he was still a high school senior. Today, after weathering financial ups and downs, he continues to own and operate rural stores full-time.

His training came entirely by way of “the school of hard knocks,” he said. He recommended hard work, stringent management, community involvement and paying employees well to minimize turnover.

Connecting independent rural stores with today’s increased emphasis on healthier food and lifestyles and expanded local food access is another shift that could help keep them viable, Procter said.

“When we started out, our focus was on economic development, but we’re shifting that somewhat to our role in providing healthy food,” he said.

Demand for local, organic and other specialty items prompts some people to by-pass their hometown stores in favor of big city offerings, he explained.

During a breakout session, Martha Murphy, a K-State extension specialist and nutrition educator from Pittsburg, talked about her experience leading a health task force in Crawford County. It began as an initiative of the Kansas Health Foundation but has since evolved into the local food policy council.

To establish priorities and goals, the original group hosted a FEAST event, which stands for Food, Education and Agriculture Solutions Together. Roughly 50 people from different sectors of the local food system spent a day sharing their perspectives and learning from each other.

“Before I came to that meeting, I had not heard of a food hub. I didn’t know what a CSA (community supported agriculture program) was,” Murphy said.

She did have a solid understanding of food production and local politics, however. Her husband Steve is a farmer, and her son Jeff is a county commissioner, in addition to being a professional ag engineer.

Eventually Murphy became part of a committee focused on increasing access to locally grown food by “growing growers.” The need became evident after her son Jeff told her, “You’re not going to get these old guys out of their tractors” to do small-scale vegetable farming. The committee has since approached Career Tech about establishing a local ag program and is also networking with area 4-H and FFA clubs to recruit young farmers. They are even looking at setting up a “land bank” that would identify empty lots that could be converted to community gardens or farmers markets.

“We need to work from the ground up and develop these farmers,” Murphy said. “Maybe they turn out to be the children of today’s farmers. This is just starting to bubble right now, but we’re really excited about it.”

Such initiatives tend to follow a progression, beginning as a public sector push and eventually transitioning into a range of privately held endeavors, according to Kathy Nyquist, president of New Venture Advisors in Chicago.

Grocery stores have a critical role to play in these community revitalization efforts, she said, while adding value to their offerings.

“Grocery stores are discovering that in some cases there is much more demand for organic and local food than they had realized,” she said. £