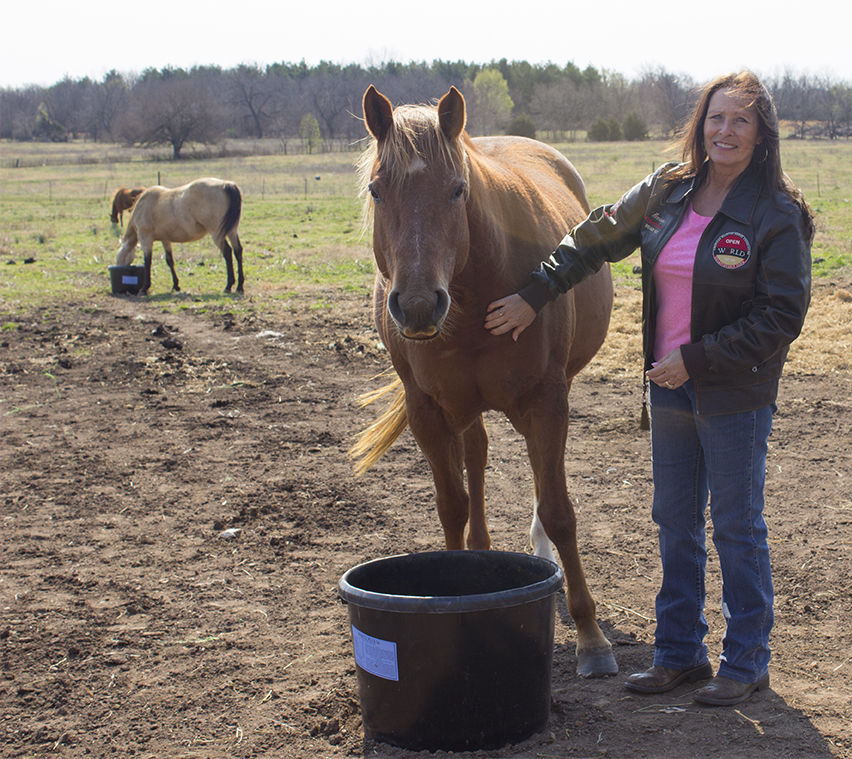 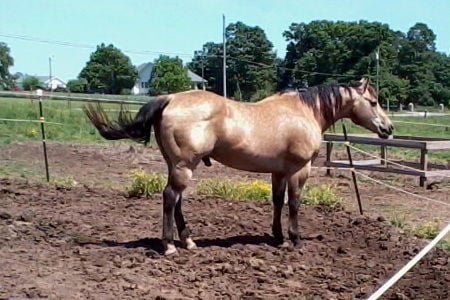 Skippo Quillo, a stallion purchased from Hank Wiescamp, is used in Bev McCormick Henry’s breeding program on her Carthage farm. 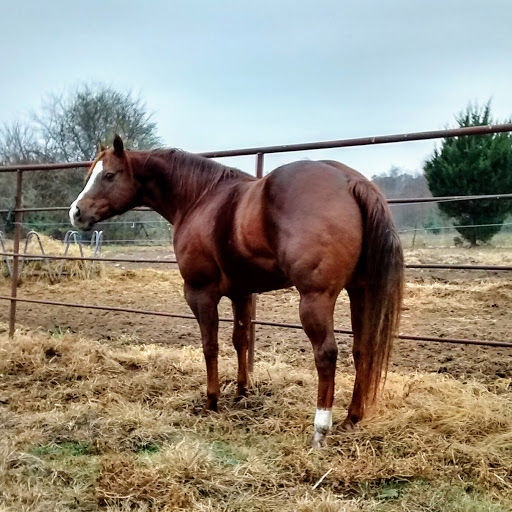 She also uses SCR Exclusive in her breeding program. 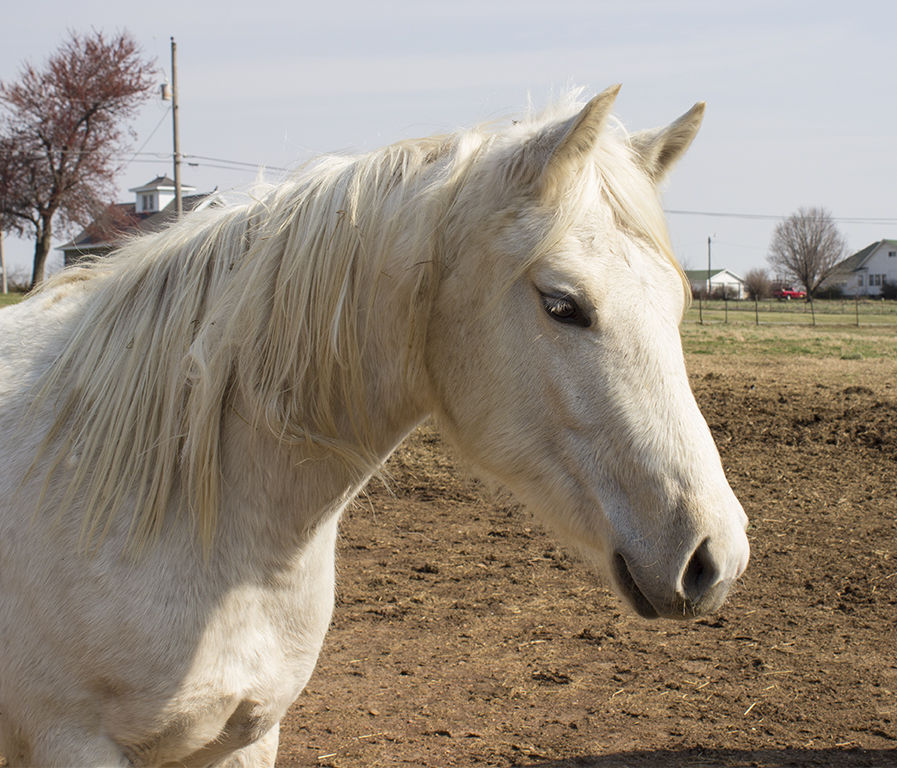 Skippo Quillo, a stallion purchased from Hank Wiescamp, is used in Bev McCormick Henry’s breeding program on her Carthage farm.

She also uses SCR Exclusive in her breeding program.

To those in the Quarter Horse world, the name “Skipper W” brings to mind images of quality horses blessed with speed and athleticism.

And Bev McCormick Henry is keeping the name — and bloodline — alive on her Carthage, Missouri, farm.

“A man in Colorado started them years ago,” Henry explained. “ They’re a line-bred bloodline. When you line breed your horses, you do it carefully so that you’re not inbreeding. Then, that helps set your type so you will consistently get the same kind of build, the same disposition, and the same look about your horse.”

According to the American Quarter Horse Association, the Skipper W line was began by H.J. “Hank” Wiescamp who was an auctioneer and horse breeder as well as an AQHA director. He sought to breed the ideal horse — one with a powerful jaw, deep heart girth, a “rear end built like a washerwoman’s”, speed and intelligence. The result was Skipper W — the 1945 sorrel stallion by Nick Shoemaker out of Hired Girl by Cowboy.

Skipper W was shown only three times and was named grand champion each time. He also was known not only as a “sire of sires” but also as a sire of broodmares. He went on to sire 13 AQHA champions and three race winners among many other high-performing horses. Wiescamp was inducted into the American Quarter Horse Hall of Fame in 1994, and Skipper W was inducted in 2011.

“I started breeding Skippers probably 20 years ago,” Henry said. “ I wanted to breed some mares, and we kept looking around at different horses. Some friends of mine had Skippers, and they were always consistent. They always had a good disposition so, when they sold out, I bought their few mares. Then, they took us to meet Hank Wiescamp in Colorado, and I bought some branded mares from him. We made several trips out there before he died.”

Henry explained Skipper horses are primarily used as ranching and roping horses. Her close proximity to Lucky J Arena helps draw attention to some of those she raised.

“Sometimes, one of the cowboys will come by because someone over there was roping on a colt that I had sold them, and they’d like to inquire about the bloodline,” Henry said. “I’ve sold several horses to some of the ropers and some guys out in Kansas have bought some.”

Those horses have turned out to be good performers in ranch rodeos, she added.

All around, the Wiescamp horses are very versatile.

“The Skipper horses are usually really pretty horses so they’d be great for someone who wants to start showing in the Quarter Horse shows or in the open shows,” Henry said. “They can show their horse in a halter class. Then when it gets old enough to break to ride, go ahead and start roping off it.”

A few of the horses she’s sold have also been used as reining horses, and she’s also recently gotten into showing horses.

“A couple of years ago, I bought a halter-bred stallion,” she continued. “When you do line breeding, you have to make sure you don’t get too tight so you get an outcross bloodline.”

Her halter-bred stallion, SCR Exclusive, is the son of Mr. Yella Fella who’s a well-known sire of halter horses.

“This horse has over 120 halter points,” Henry explained. “The man who had shown him and bought him broke him to ride to start making a roping horse out of him and turned him into a heading horse.

“So, there’s a well-known halter bloodline that can turn around and do roping that’s not even really bred for it,” she continued. “People get a stigma that the halter horses can’t do anything but stand there and look pretty but it’s wrong.”

She’s used the stallion on some of her Skipper mares and the combination seems to be working well, she said. She also artificially inseminates a few mares to other well-known halter sires.

Despite crossing some with halter bloodlines, she does work to maintain the integrity of her Skipper horses.

“I’ve tried to keep my bloodline pure,” Henry said. “I try to keep a set of pure Skipper mares because there’s not any pure ones anymore.”

She purchased her buckskin stallion, Skippo Quillo, from Wiescamp as a 2-year-old.

“He has done a great job of adding color to my babies,” she said. “That always helps sell them. Everyone likes palomino or buckskin. He will be 19 years old in May and is still going strong.”

After Wiescamp died in 1997 and the estate was sold out, she began receiving the occasional phone call from someone searching for a pure Skipper mare.

Henry sells about 10 to 12 colts every year including a few 2-year-olds that are ready to be broke.

“I need to change the cowboy’s way of thinking that they should only ride a gelding and not ride a filly,” she said with a smile. “They’d be happy with the fillies if they’d just try one.”

“I got started in halter showing about three years ago,” she said. “My show filly is now a 3-year-old mare. We got to go to the big Breeders Halter Futurity in Iowa.”

Her horse, Bandeeta, was sixth at the 2014 AQHA World Show in the weanling mares finals. She also has been invited to this year’s AQHA Level 1 Championships after being named high point amateur for the state of Missouri.

Another mare, Last Pleazin ByMr, has a good chance of being put onto the AQHA list of producing dams with offspring having the most World championships, she said. This mare one son who has accumulated 10 World titles so far and will probably add to that this year in performance halter geldings.

“It takes some money but it’s fun and it gets you out amongst horse people and there’s some really good people out there who are more than willing to help you when you don’t really know what you’re doing. All you’ve got to do is ask them.”

She stressed the importance of good nutrition in raising horses.

“The main thing I think that’s really important is to feed good quality hay,” she said. “You can’t feed your horses fescue hay or prairie hay and get by and expect them to grow to their potential.”

Especially during the first year and during pregnancy, she said, nutrition is critical.

“If you don’t grow them when they’re young, you can’t grow them later,” she added. She feeds whole oats and an alfalfa or alfalfa-orchardgrass hay and also feeds mineral to ensure her horses meet their nutrient requirements.

She also watches her horses for HYPP, or hyperkalemic periodic paralysis. She has both N/N horses and N/H horses but watches to ensure an N/H horse is not bred to another N/H horse.

“It used to scare me when I didn’t have much knowledge about it,” she said. “Now that I have knowledge, it’s so easy to control and maintain. It’s the fear. If people would, instead of jumping to conclusions, just talk to people who have always had them — they’ll give you your best advice.”

Overall, Henry is in it for the horses.

“I love the babies,” Henry said. “It’s my favorite time of year to see if that cross worked well. If there was a chance for me to have a colored baby — a buckskin or a palomino — it’s really exciting to see if you get the colored baby.

“That’s what makes it all worth it,” she continued. “You know it’s a lot of work. You can do it without spending a whole lot of money if you’re really, really careful but you have to love it because they will break your heart.

“Whatever you do, you’ve got to enjoy it,” she concluded with a smile. £