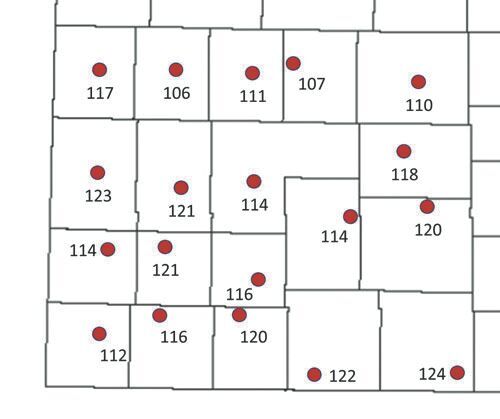 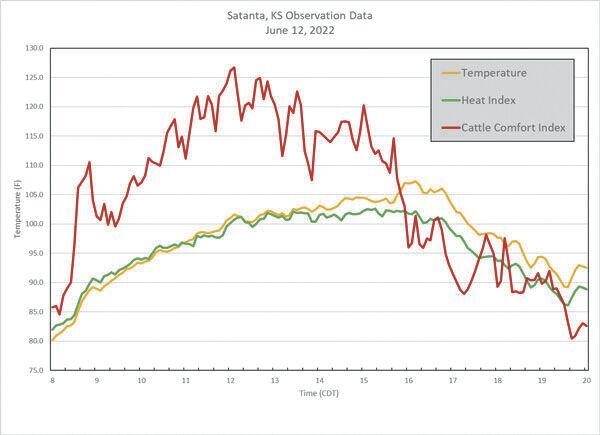 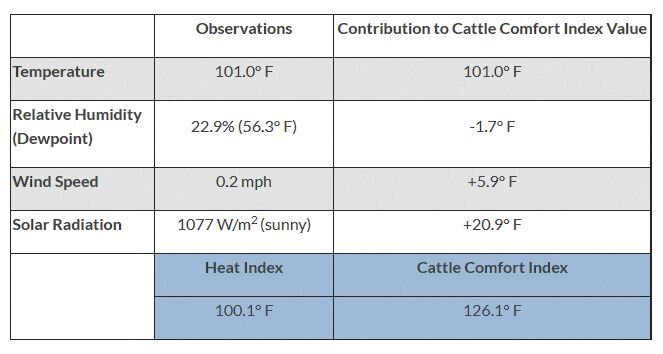 Table 1. Observations at Satanta, KS at 12 pm on June 12, 2022, and their individual contributions to the value of the Cattle Comfort Index.

The recent heat wave gripping the central United States has been felt across Kansas, and evidence of its intensity can be found by looking at data from the Kansas Mesonet. The peak of the heat wave was on June 13, when the average high air temperature on the Mesonet was a sizzling 101.1° statewide, the hottest day so far this year. The hottest temperature recorded was 107.6° at the Satanta (Seward County) station on June 12. Thanks to drier air, the peak heat index was only 102.6° at Satanta that day. However, across southwest Kansas there were reports of cattle succumbing to the heat. The heat index wasn’t even at Heat Advisory criteria (105° or higher). So, what happened?

A look at the Cattle Comfort Index (CCI), and the components which comprise it, tells a different, disastrous story. The CCI is a measure of apparent temperature, similar to the heat index. While heat index is only a function of temperature and relative humidity, the CCI includes two additional variables: wind speed and solar radiation. Let’s take a look at Satanta, and the conditions at 12:00 pm on June 12 (Table 1).

The air temperature was 101.0° F, with a low relative humidity of 22.9%, which resulted in a heat index of 100.1° F, slightly cooler than the air temperature. How did relative humidity impact the CCI? By definition, a relative humidity less than 30% results in a negative contribution to the CCI, with 22.9% humidity resulting in a 1.7° decrease in the CCI. The winds were nearly calm with no cooling effect resulting in an increase of 5.9°F. The solar radiation was 1077 W/m2, basically cloud free increasing the CCI another 20.9°F. The resultant CCI at 12 pm was a sweltering 126.1° F. When the CCI is 105° F or greater, there is danger of loss of livestock. The CCI remained above 105° at Satanta from 9:45 am until 3:50 pm (Figure 1), peaking at 126.7° F at 12:05 pm. So while the traditional Heat Advisory criteria were never met that day, the CCI was at extreme values for an extended period.

June 12 was the third of a five-day period with extreme heat following a cool start to the month. The rapid increase in temperature gave little time for cattle to properly adjust to the warm extremes. Figure 2 shows that extreme CCI values occurred all across southwest Kansas on June 11 as well. Table 2 lists the highest CCI values recorded at selected locations in southwest Kansas during the heat wave, based on hourly average observations from the Kansas Mesonet. Table 3 lists the number of hours each of those locations spent above different CCI thresholds.

Historical comparison of the June 2022 event

While most Mesonet sites have short periods of record, the Garden City site has been online since 1985, so we can draw some historical perspective on the rarity of CCI values this extreme. The peak value of 113.9° F at 3 pm CDT on June 11 was the highest reading since June 17, 2017, and was the 7th highest ever recorded at 3 pm during any month. The highest CCI ever recorded at Garden City was 122.7° F on June 8, 1988. The average CCI for 3 pm in the month of June at Garden City is 89.5° F. Garden City averages 35 hours a year with CCI values at or above 105° F, but only 7 hours above 110° F. Keep in mind, these are measurements taken on site over a grass surface with good exposure. Conditions will vary significantly with cover type, shade, exposure, and other practices.

Coinciding with the warm Cattle Comfort Indices, the warmest afternoon air temperature readings occurred on June 12 and June 13 with readings as high as 106.4°F. On the flip side, recovering temperatures overnight remained very warm; Ashland, Grant, and Ness City all had lows above 80° on the morning of June 13. The warm overnight readings occurred mostly due to overnight heat bursts with decaying thunderstorms. Fortunately, cattle had adjusted to the increased temperatures and/or managers had been able to adapt to conditions. In addition, these conditions yielded much drier air and breezy conditions – both conducive to relaxed CCI values.